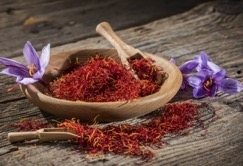 Just recently, I've been using a wider variety of spices in my cooking, as I am aware many of them have therapeutic value as well as being delicious additions. Each time I incorporate a new ingredient I learn more about it and check out any research. So the spice of the moment is saffron, which turns out to be a bit of a star ingredient.

Most people know saffron as a spice common to Mediterranean, Eastern and Middle-Eastern recipes. In addition to adding a unique flavour to foods, saffron has also been used for many centuries as a medical treatment for a variety of health conditions, including inflammation, digestive problems, kidney stones, menstrual disorders, colds, insomnia, asthma and depression.

Depression and anxiety are common mental health problems with high economic and social costs. About 8-12% of the world population are thought to experience depression in their lifetime and in many cases, this occurs along with anxiety. Some of the treatments available for depression include antidepressant drugs and psychotherapy. Antidepressants and anti-anxiety medications have several limitations such as numerous adverse side-effects and low rates of efficacy. There is obviously a great need for an effective and less toxic form of therapy for those suffering from depression and/or anxiety.

As a component of Islamic Traditional Medicine, saffron has a history of being used for treating a range of ailments. Within the last 20 years studies have confirmed the medicinal properties of saffron as being antioxidant, anti-carcinogenic, neuroprotective and cardioprotective.

There has recently been several clinical trials looking at the antidepressant effects of saffron and comparing this to medications. Trials of saffron stigmas and saffron petals both showed significant improvements in depression compared to placebos. Another study combined saffron with curcumin and this combination was effective in reducing symptoms of depression and anxiety.